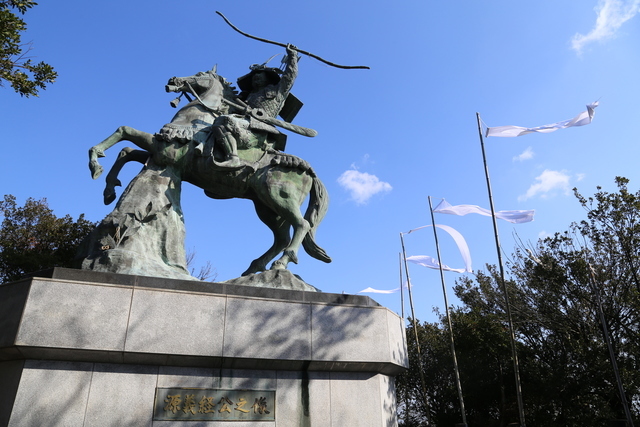 Hatayama is the name of the statue of the heroic Minamoto-no-Yoshitsune riding his horse. During the battle between the Genji and Heike, Yoshitsune landed at Katsuura Amako ga Ura (now known as the Tano Area) to raise a flag at the summit of Hatayama and lift the soldiers morale. The 6.7 meter statue is Japan’s tallest Minamoto-no-Yoshitsune statue. At night, spotlights light up the statue.

Each area of Japan has its own folklore of Minamoto no Yoshitsune. The military commander from the end of the Heian Period (794-1185).
Komatsushima has many stories of the legendary Yoshitsune. The stories tell of the battle prodigy’s achievements during the war between the Heike and Genji clans (Genpei War, 1180-1185). There are three famous battles of the Genpei War. The battle of Ichi no Tani, the battle of Yashima, and the final battle in which the Heike clan were defeated, the battle of Dan no Ura. Of the three, the battle of Yashima shares history with Komatsushima. At that time, Yoshitsune, hoping to surprise the enemy from behind, sailed with his troops from the port in Osaka to Komatsushima.
Arriving during a violent rainstorm, Yoshitsune and his retainers disembarked at a place still known today as Seigoū. Hoping to raise the morale of his troops, Yoshitsune raised the Genji clan’s banner at the hill still called Hatayama. From there, Yoshitsune and his troops began their march toward Yashima, pursuing the Heike troops at Kumayama Castle and Sakurama Castle. Throughout the day’s conflicts the Heike clan troops continued to elude defeat. Yoshitsune and his troops continued their pursuit, crossing the prefectural border at Osaka Ridge and arriving at Yashima during the night. This march would be known as the Yoshitsune Highway.
Ten kilometers of the Yoshitsune Highway run through Komatsushima and are now known as the Yoshitsune Dream Road. Information signs and directional markers have been raised along the path. It is possible to traverse this highly recommended sightseeing path in one day by car. Come and immerse yourself in history and the feelings of the past on this path through Komatsushima.